Changes in Farming in the UK 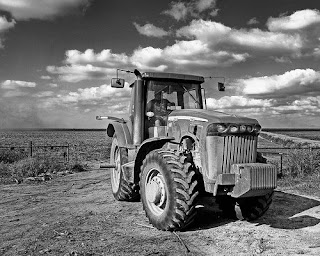 After World War II the government launched a campaign to increase agricultural production to try and solve the problems of food shortages and eliminate the need for rationing that had occured during the war. The aim was quite simply to make the UK self-sufficient. As part of the government drive to increase farm production and efficiency, in 1973 the UK joined the Common Market (now known as the European Union) and adopted what was known as the Common Agricultural Policy.

1. Stabilise markets, creating a single market in which the free movement of agricultural products could take place
2. Increase self-sufficiency by restricting imports and giving preference to produce from the European Union.
3. increase average field and farm size as well as to increase profit for farmers
4. Increase agricultural production by guaranteed prices for farmers

3 main policies were used to achieve the aims above, these were:

1. Subsidies and Grants - money was given to support farmers by supplmenting their income, in the form of subsidies. Grants were also given to enable farmers to fund schemes to increase production
2. Tarrifs (Import Taxes) - import taxes were used to restrict imports and therefore stimulate the market for products from the EU, further encouraging increased production.
3. Guaranteed Prices - regardless of world market prices, CAP ensured that farmers were guaranteed a fixed price for what they produced

By the mid-1980s, the Common Agricultural Policy had been so successful that over-production had become a problem with large surpluses of produce resulting in 'grain mountains'. A number of changes were made to CAP to try and control the problem of over-production, these included:

1. QUOTAS - these involved setting amounts for how much milk or crops could be produced. If farms exceeded these amounts then they were fined.
2. SET-ASIDE - the European Union funded set-aside in order to reduce the problems of surplus. This is where farmers were paid not to farm some of their land which would for example be left fallow or used for non-agricultural purposes. In 1995, due to the EU shortage of vegetable oil, farmers were paid a high subsidy of £445 per hectare for planting oilseed rape.
3. DIVERSIFICATION - farmers were encouraged to move into other areas of business to make money, this included PYO (Pick Your Own), Farm Shops, Bed and Breakfast, Renting out land etc.

Overall in response to the Common Agricutural Policy and the drive to increase agricultural production since World War II, there have been a number of key changes in arable farming in East Anglia over the last 50 years:

Key changes in Farming in East Anglia since 1950:

1. AGRIBUSINESS - farming has become large scale and 'capital intensive', now often run by large companies as opposed to being owned by individual farmers. These agribusiness companies use hi-technology and agrochemicals to maximise yields and maximise profits

2. FIELD SIZE & MECHANISATION - hedgerows have been removed to increase field size to increase production and also to enable machinery such as tractors, combine harvesters etc. to be used more efficiently.

3. LAND RECLAMATION - land, previously not used for agricultural production has been reclaimed in order to provide more opportunities for agricultural land-use. This has involved clearing woodlands, draining marshlands and fertilising sandy soils.

5. CHEMICALS - there has been an increasing use of fertilisers to support new hybrid seeds and to increase yields, by allowing crops to continually be grown in the same fields without the need for crop rotation. There has also been an increase in the use of pesticides and herbicides.

6. DIVERSIFICATION - increasingly farmland is being used for other purposes such as camping, Bed and Breakfast facilities etc.

As a result of the changes above, there has been an increasing environmental impact, including:

(i) - almost 50% of the UKs hedgerows were removed between 1945-1990 resulting in the removal of important habitats, resulting in a decline in farm bird populations such as the skylark and corn bunting. Removal of the hedgerows has also resulted in increased soil erosion as there are no longer hedgerows to act as windbreaks.

(ii) the increase in use of pesticides and herbicides has increased water pollution as they are washed from the fields in runoff and leaching. This has led to eutrophication of surrounding water courses - i.e. the over-enrichment of the water with nutrients which has led to an overall decrease in species diversity as weed and other vegetation has proliferated at the expense of other water life.