Why is the area around Lynford Hall Farm ideal for arable farming?

CLIMATE - average annaul rainfall is approx 650mm , summers are warm around 26oC, ideal for ripening, cold winters break up the soil and kill off bacteria.
LAND - the land is very flat in this area, ideal for machinery
SOILS - well drained and fertile boulder clay - this area of the UK is often known as the 'bread basket of the UK' with its rich soils which are glacial in origin
MARKET - the area is close to a densely populated region (just North of London), with a large market for selling crops, supplying many major supermarkets of the East and South East.
COMMUNICATIONS - there are major road links, including the A1 and M11 which enable the rapid transport of crops to market.

What are the characteristics of the farm?

- crops grown include wheat, potatoes and peas
- it is a large farm with 570 hectares in area (it is an example of extensive farming - with relatively few inputs compared to size of farm)
- high output per hectare
- highly mechanised - uses large and specialist machinery and specialist buildings (e.g. grain store, with drying faciltiy and environmental cold stores for potatoes), there are a small number of full time workers

- uses good quality, hybrid seeds which are used to maximise the yields produced
- there is a heavy use of fertilisers and pesticides
- the output is cash crops which are produced and sold for profit
- profits are invested back into the farm - the farm is run by the family partnership, Sears Bros Ltd. 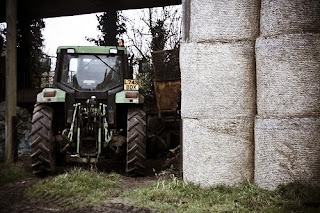 Changes to the System (for more info follow this link):

- There are a number of bungalows on the land some of which have been sold, others are rented
- The farm has looked at the option of wind energy and the possibility of situation wind turbines on the land - however this has been met with objections and has not been undertaken
FOR FURTHER INFORMATION ABOUT LYNFORD HALL FARM INCLUDING SPECIFIC DETAIL ON THE FARMING SYSTEM, CHANGES etc. SEE THE FACE (Farming and Countryside Education) CASE STUDY PAGE
Photo Credit: Sarahpetherbridge http://www.flickr.com/photos/25890036@N07/3150728496/