What needs to be considered in the location of a distribution centre? 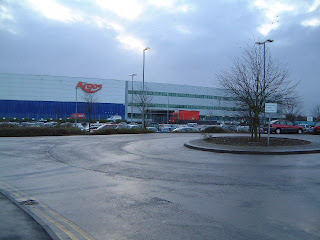 Therefore things to consider will be:

Argos, the pioneer of catalogue retailing is one of the UK's leading retailers with a total of 474 stores in the UK / Republic Ireland and with annual sales of over £3 billion, serving over 41 million customers per year.

As well as outlet shops based on their catalogue, there is Argos Direct, the home shopping service (based on both telephone and web based orders).

The map opposite shows the location of the distribution centre. Why then did Argos choose to locate at this site?
There were however some problems with the location:
The site itself, although having excellent accessibility was not ideal for expansion opportunities due to be constrained by the surrounding transport networks (A440, M6 and railway - see map)

Since the opening of the Acton Gate centre a new centre has now opened at Milton Keynes (Marsh Leys) and a third and largest centre opened in Darlington in 2005, further helping to reduce delivery distances.